Road to Disaster: A New History of America's Descent into Vietnam 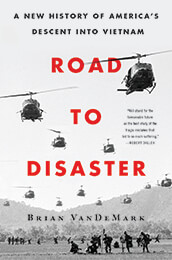 Many books have been written on the tragic decisions regarding Vietnam made by the young stars of the Kennedy and Johnson administrations. Yet despite millions of words of analysis and reflection, no historian has been able to explain why such decent, brilliant, and previously successful men stumbled so badly.

That changes with Road to Disaster. Historian Brian VanDeMark draws upon decades of archival research, his own interviews with many of those involved, and a wealth of previously unheard recordings by Robert McNamara and Clark Clifford, who served as Defense Secretaries for Kennedy and Johnson. Yet beyond that, Road to Disaster is also the first history of the war to look at the cataclysmic decisions of those in the Kennedy and Johnson administrations through the prism of recent research in cognitive science, psychology, and organizational theory to explain why the "Best and the Brightest" became trapped in situations that suffocated creative thinking and willingness to dissent, why they found change so hard, and why they were so blind to their own errors.

An epic history of America’s march to quagmire, Road to Disaster is a landmark in scholarship and a book of immense importance.

"The most thoughtful and judicious one-volume history of the war and the American political leaders who presided over the difficult and painful decisions that shaped this history. The book will stand for the foreseeable future as the best study of the tragic mistakes that led to so much suffering." (Robert Dallek, New York Times bestselling author of An Unfinished Life and Franklin D. Roosevelt)

"An immensely readable and richly informative book, the best study to date of those fateful years when the Kennedy and Johnson administrations Americanized the war in Vietnam." (George Herring, University of Kentucky, author of America’s Longest War: The United States and Vietnam, 1950-1975)

"A monumental achievement...Brian VanDeMark shows that we still have much to learn about America’s war in Vietnam. Road to Disaster is an excellent and accessible history of decision making in the Kennedy and Johnson years." (Robert K. Brigham, Vassar College, author of Reckless: Henry Kissinger and the Tragedy of Vietnam )

"Why do smart people do stupid things? That is the tragic question at the heart of this brilliant exploration of American leaders and the Vietnam War. With keen insight, some clever new analytical tools, and storytelling drive, Brian VanDeMark has made a timeless tale fresh and riveting—and highly relevant." (Evan Thomas, author of Ike’s Bluff, Robert Kennedy, and Being Nixon)

"Monumental…a landmark...This is the book I’ve been waiting for — a thorough and thoughtful history of what led to the war that shaped my life." (Washington Independent Review of Books)

"Original and thought provoking...The sense of introspection it provides adds poignancy to the records of meetings and field trips by U.S. civilian and military leaders, who never quite came to grips with the unfolding tragedy." (Foreign Affairs)

"A nuanced and compelling examination of American decision making on Vietnam due in large part to its integration of cognitive and  behavioral research." (Journal of American History)

"A hard look at the flawed decision-making that figured in America’s misadventures in Southeast Asia...VanDeMark turns in some surprising observations...A fresh but sobering approach to the disastrous war in Vietnam." (Kirkus Reviews)

"This book is sure to appeal to those still searching for Vietnam War answers that even McNamara, Johnson, and their best and brightest advisers never found." (Publishers Weekly) starred review

"[An] exceptional work.…VanDeMark offers a valuable corrective to the Good Guys/Bad Guys theory of war making, and there’s no doubt he knows his research. Will interest military history buffs and anyone still trying to understand America’s most outstanding military fiasco." (Library Journal) starred review

"An important book...This book deserves attention and will appeal to those still searching for Vietnam War answers that Robert S. McNamara, Lyndon Johnson, and their best and brightest advisors never found." (Vietnam Veterans of America Magazine)

"Brian VanDeMark’s Road to Disaster: A New History of America’s Descent into Vietnam is a startling read, a book that puts America’s leaders on the couch and analyzes the psychology behind the decisions that led us into an unwinnable war in Southeast Asia." (Military.com)

"Beautifully written...the story has been untangled by a skillful historian who has laid it out in a way that makes the madness relatively easy to follow. It was impossible to put the book down." (War History Online)

"A careful analysis...a remarkable and highly personal work that will interest a broad readership...adds depth and nuance to this story, moving well beyond stereotypical views." (Michigan War Studies Review)

American Sheikhs: Two Families, Four Generations, and the Story of America's Influence in the Middle East 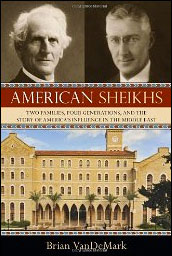 In 1866, American missionaries founded a small college in Beirut, Lebanon, called the Syrian Protestant College. Later renamed the American University of Beirut (AUB), what was a humble missionary school grew to become the most influential institution of higher education in the Middle East. Originally created by Rev. Daniel Bliss with the financial backing of businessman William E. Dodge, AUB, under the leadership of four generations of the Bliss and Dodge families, became the preeminent symbol of American culture and values in the Middle East. Its graduates include countless leaders, legislators, ambassadors, educators, scientists, doctors, and businessmen, whose lives and accomplishments played a significant role in much of the modern history in this critical region of the world.

American Sheikhs is not just the story of a great institution and the families who created and fostered it for almost 150 years. Author Brian VanDeMark's vivid narrative does indeed include the colorful history of AUB and many memorable episodes in a family saga, but he also pursues larger and more important themes. In the story of the efforts of these two families to build a great school with alternating audacity, arrogance, generosity, paternalism, and vision, the author clearly sees an allegory for the larger history of the United States in the Middle East.

Before 1945, AUB's history is largely positive. Despite American nationalism and presumptions of Manifest Destiny, Middle Easterners generally viewed the school as an engine of constructive change and the United States as a benign force in the region. But in the post-World War II era, with the rise of America as a world power, AUB found itself buffeted by the strong winds of nationalist frustration, Zionism and anti-Zionism, and—eventually—Islamic extremism. Middle Easterners became more ambivalent about America's purposes and began to see the university not just as a cradle of learning but also as an agent of undesirable Western interests.

This story is full of meaning today. By revealing how and why the Blisses and Dodges both succeeded and failed in their attempts to influence the Middle East, VanDeMark shows how America's outreach to the Middle East can be improved and the vital importance of maintaining good relations between Americans and the Arab world in the new century. 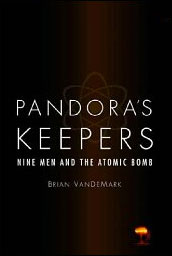 Nine men - Oppenheimer, Teller, Fermi, Bohr, Lawrence, Bethe, Rabi, Szilard, Compton - brilliant men who believed in science and who saw before anyone else the amazing workings of an invisible world. Some of them were fleeing Nazism in Europe, others quietly slipping out of university teaching jobs, all gathering in secret wartime laboratories to create the world's first atomic bomb. At a secret laboratory in the mountains of northern New Mexico, they would crack the secret of the nuclear chain reaction and construct the most fearsome weapon mankind had ever known. Together they built a device that could incinerate a city and melt human beings so thoroughly that the only thing left would be their scorched outlines on the pavements. During the war, few of the atomic scientists questioned the wisdom of their desperate endeavour, but afterwards they were forced to deal with the sobering legacy of their creation. Some were haunted by the dead of Hiroshima and Nagasaki and would become antinuclear weapons activists; others would go on to build bigger and even deadlier bombs.

Into the Quagmire: Lyndon Johnson and the Escalation of the Vietnam War

In November of 1964, as Lyndon Johnson celebrated his landslide victory over Barry Goldwater, the government of South Vietnam lay in a shambles. Ambassador Maxwell Taylor described it as a country beset by "chronic factionalism, civilian-military suspicion and distrust, absence of national spirit and motivation, lack of cohesion in the social structure, lack of experience in the conduct of government." Virtually no one in the Johnson Administration believed that Saigon could defeat the communist insurgency--and yet by July of 1965, a mere nine months later, they would lock the United States on a path toward massive military intervention which would ultimately destroy Johnson's presidency and polarize the American people.

Into the Quagmire presents a closely rendered, almost day-by-day account of America's deepening involvement in Vietnam during those crucial nine months. Mining a wealth of recently opened material at the Lyndon Baines Johnson Library and elsewhere, Brian VanDeMark vividly depicts the painful unfolding of a national tragedy. We meet an LBJ forever fearful of a conservative backlash, which he felt would doom his Great Society, an unsure and troubled leader grappling with the unwanted burden of Vietnam; George Ball, a maverick on Vietnam, whose carefully reasoned (and, in retrospect, strikingly prescient) stand against escalation was discounted by Rusk, McNamara, and Bundy; and Clark Clifford, whose last-minute effort at a pivotal meeting at Camp David failed to dissuade Johnson from doubling the number of ground troops in Vietnam. What comes across strongly throughout the book is the deep pessimism of all the major participants as things grew worse--neither LBJ, nor Bundy, nor McNamara, nor Rusk felt confident that things would improve in South Vietnam, that there was any reasonable chance for victory, or that the South had the will or the ability to prevail against the North. And yet deeper into the quagmire they went.

Whether describing a tense confrontation between George Ball and Dean Acheson ("You goddamned old bastards," Ball said to Acheson, "you remind me of nothing so much as a bunch of buzzards sitting on a fence and letting the young men die") or corrupt politicians in Saigon, VanDeMark provides readers with the full flavor of national policy in the making. More important, he sheds greater light on why America became entangled in the morass of Vietnam.

In Retrospect: The Tragedy and Lessons of Vietnam 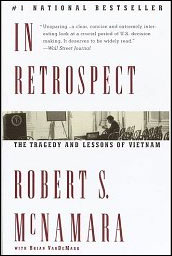 The #1 national bestseller--an indispensable document for anyone interested in the Vietnam War. McNamara's controversial book tells the inside and personal story of America's descent into Vietnam from a unique point of view, and is one of the most enlightening books about government ever written. This new edition features a new Foreword by McNamara.